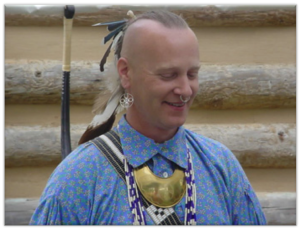 “As a flute maker, I began by making traditional rivercane flutes, and later making flutes out of the many different woods that are native to the area we live. I then started to incorporate inlayed stone, shell and metal into my wooden flutes. The designs I use mainly come from ancient Mississippian designs that are unique to tribes in the Southeast. I also draw inspiration from our traditional Cherokee stories, and I sometimes depict scenes from these stories in my inlay designs and carvings.

“I believe that the Native American Indian flute is one of the most unique and beautiful sounding instruments in the world. Native Flutes are one of the oldest instruments on earth. They have been a part of Cherokee and other Southeastern Indian culture dating back to ancient times. Being a flute player as well as a maker, I strive to make a beautiful sounding flute that plays well, as well as being a piece of art. One of the things I love the most about flute making and carving is continuing art forms that are rooted so far into the past. For me, my artwork is a way of preserving and continuing our culture, and honoring the ancestors that gave us our way of life.”

Hailing from Greenville, Tennessee, Daniel Bigay is a multi-talented artist and musician, whose main passion is flute making. A member of the Echota Cherokee Tribe, Daniel has been creating traditional and contemporary Southeastern Indian art for over 25 years. In addition to flute making, he is an accomplished carver of gourds and shell. Many of his pieces have won top awards at major Native American art shows and he has performed flute music and demonstrated flute making at numerous shows around the country. One of his two nationally released CDs, Bird Songs, was nominated for best flute recording at the 2005 Indian Summer Music Awards.