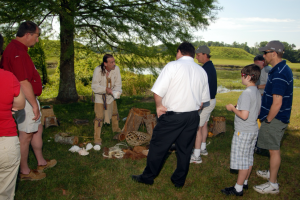 Nolberto Gillespie is of Cherokee descent and lives in Altamont, Tennessee. He is an avid painter and maker of bark baskets. His paintings focus on Southeastern Indians, particularly those from the Mississippian late prehistoric period, such as the people who once lived at Moundville. Nolberto frequently demonstrates bark basketry at the Moundville Native American Festival. Several of his pieces are on exhibit at the recently renovated Jones Museum in Moundville Archaeological Park.