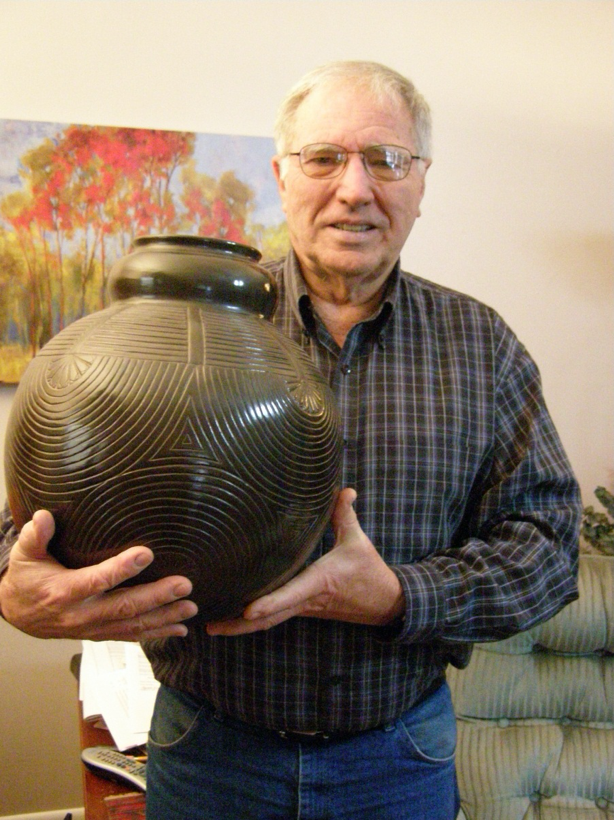 “My opportunity to be an artist is a fulfillment of a life-long dream that I have had since a small boy when I was carving all of my mother’s lye soap. After retiring, I started at the beginning of 2005 to pursue my dream. I am basically self-taught.

“As I form clay, I feel it transforms from a clump of moist earth into an object that comes from the depths of my heart and soul. Although I have somewhat of an idea as the clay begins to take shape, I never really know what is going to be formed. As a result, my pieces are one-of-a-kind.

“I have studied the culture and fine works of the Late Woodland and Early Mississippian styles and strive to form pottery in that fashion.

“I hand dig most of my clay and prepare it into a workable medium. All of the shaping and forming of the piece is done by hand with simple tools. I hand-burnish or polish the surfaces with various polishing tools to acquire the shiny finish. Most of the pieces are completed by highly controlled primitive firing.”

A native of Wetumpka, Oklahoma, Scott Roberts studied anthropology, especially the moundbuilding cultures of prehistoric North America (650-1650 A.D.) After retiring in 2005, he began making pottery, striving to replicate the methods and styles of the ancient people, bringing it back as a fine art form. He is a member of the Muscogee (Creek) Nation of Oklahoma.